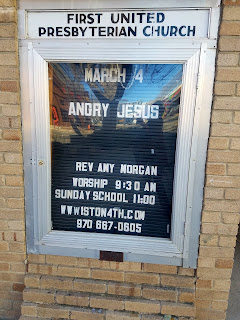 John 2:13-22
The Passover of the Jews was near, and Jesus went up to Jerusalem.
14 In the temple he found people selling cattle, sheep, and doves, and the money changers seated at their tables.
15 Making a whip of cords, he drove all of them out of the temple, both the sheep and the cattle. He also poured out the coins of the money changers and overturned their tables.
16 He told those who were selling the doves, "Take these things out of here! Stop making my Father's house a marketplace!"
17 His disciples remembered that it was written, "Zeal for your house will consume me."
18 The Jews then said to him, "What sign can you show us for doing this?"
19 Jesus answered them, "Destroy this temple, and in three days I will raise it up."
20 The Jews then said, "This temple has been under construction for forty-six years, and will you raise it up in three days?"
21 But he was speaking of the temple of his body.
22 After he was raised from the dead, his disciples remembered that he had said this; and they believed the scripture and the word that Jesus had spoken.

Popular posts from this blog

December 17, 2018
The First United Presbyterian Church “The Guest” Rev. Amy Morgan December 16, 2018
Listen to audio
Malachi 3:1-4 See, I am sending my messenger to prepare the way before me, and the Lord whom you seek will suddenly come to his temple. The messenger of the covenant in whom you delight-- indeed, he is coming, says the LORD of hosts.  2 But who can endure the day of his coming, and who can stand when he appears? For he is like a refiner's fire and like fullers' soap;  3 he will sit as a refiner and purifier of silver, and he will purify the descendants of Levi and refine them like gold and silver, until they present offerings to the LORD in righteousness.  4 Then the offering of Judah and Jerusalem will be pleasing to the LORD as in the days of old and as in former years.
Luke 3:1-18 In the fifteenth year of the reign of Emperor Tiberius, when Pontius Pilate was governor of Judea, and Herod was ruler of Galilee, and his brother Philip ruler of the region of Ituraea and Trachonitis, and Lysa…
Read more

The Sword That Heals 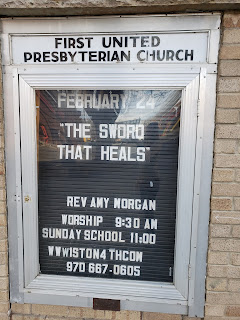 The First United Presbyterian Church “The Sword That Heals” Rev. Amy Morgan Feb. 24, 2019
Listen to audio
Genesis 45:3-11, 15 Joseph said to his brothers, "I am Joseph. Is my father still alive?" But his brothers could not answer him, so dismayed were they at his presence.  4 Then Joseph said to his brothers, "Come closer to me." And they came closer. He said, "I am your brother, Joseph, whom you sold into Egypt.  5 And now do not be distressed, or angry with yourselves, because you sold me here; for God sent me before you to preserve life.  6 For the famine has been in the land these two years; and there are five more years in which there will be neither plowing nor harvest.  7 God sent me before you to preserve for you a remnant on earth, and to keep alive for you many survivors.  8 So it was not you who sent me here, but God; he has made me a father to Pharaoh, and lord of all his house and ruler over all the land of Egypt.  9 Hurry and go up to my father and say to hi…
Read more

April 07, 2019
The First United Presbyterian Church “Shall Woman Preach?” Rev. Amy Morgan April 7, 2019
Listen to audio
1 Corinthians 14:32-40 32 And the spirits of prophets are subject to the prophets,  33 for God is a God not of disorder but of peace. (As in all the churches of the saints,  34 women should be silent in the churches. For they are not permitted to speak, but should be subordinate, as the law also says.  35 If there is anything they desire to know, let them ask their husbands at home. For it is shameful for a woman to speak in church.  36 Or did the word of God originate with you? Or are you the only ones it has reached?)  37 Anyone who claims to be a prophet, or to have spiritual powers, must acknowledge that what I am writing to you is a command of the Lord.  38 Anyone who does not recognize this is not to be recognized.  39 So, my friends, be eager to prophesy, and do not forbid speaking in tongues;  40 but all things should be done decently and in order.
Mark 14:3-9 While he was at Bethany in th…
Read more